Laborers Together With Christ 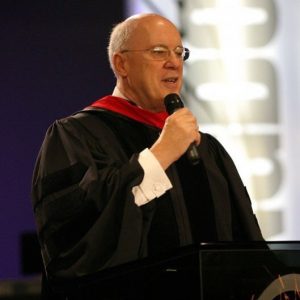 Dr. William Morris is the founder of Covenant Bible College and Seminary. The ministry of Dr. William Morris has spanned 47 years since God called him as a teenager. Since that time he has served in various ministry roles. He has been a pioneer church planter, pastor, evangelist, music minister, youth pastor, missionary evangelist, radio minister, College Founder and Chancellor and has served on various ministerial boards and committees.

His ministry took him to Kenya, Estonia, Ukraine, Scotland, England and Finland as well as the USA.

He has been known for many years as a teacher of praise and worship and has shared this message around the world. Churches have exploded with the glory of God as praise is lifted high. God always ‘shows up’ in the meetings and confirms His Word with mighty signs and wonders.

Dr. Morris has an apostolic anointing and is on the ‘cutting edge’ of what God is doing in the world! From the early 70’s he has been preaching on getting back to the basics of the early church. God spoke to him, “If you want what they had, you must do what they did.” It was at that time that he received revelation on the 5-fold ministry, and has taught these messages around the world. Along with the 5-fold ministry teaching, his messages emphasize Jubilee, Repentance, Water Baptism, The Holy Spirit, Communion, The Fear of God, Praise and Worship, The Apostles Doctrine, Sign and Wonders, Proper Church Order, Prosperity and the End-Time Revival. Mighty revival breaks out as Dr. Morris shares these messages.

Dr. Morris has been credentialed with the Church of God, the Assemblies of God and is presently ordained with Rhema Ministerial Association International (RMAI), World Ministry Fellowship (WMF), Covenant Fellowship International (CFI) and The International Pentecostal Holiness Church, Inc (IPHC).

Dr. Morris and his wife Deborah have been blessed with one son, two daughters, and seven grandchildren. They are all active in ministry. Their daughter Leah Luzecky sang with the Rhema Singers & Band for 10 years and for the last 12 years has been one of the worship leaders with Kenneth Copeland Ministries, KCM.

On March 1, 2019 it became necessary for Dr. Morris to pass the mantle of this great work to the next generation. He remains in prayer and continues to love the work of the Lord as he embraces the next season of his life with his family around him and the unwavering love of his beautiful wife Deborah. There is a permanent place at Covenant Bible College and Seminary for him and the influence of his work. We are all deep in his debt…

Dr. Jonathan L Vorce was born December 15th, 1967 in Mt Pleasant, Michigan USA. He is the son of a Pioneer Pastor, and preached his first message at the age of 8 years old. He received his call to the ministry in a revival preached by B.P. Carrol at an Assemblies of God Church in Neosho, MO where Rev. D.C. Branham was Pastor.

Throughout his teenage years, Dr. Vorce preached in churches, on street corners, in rest homes, and in prisons. He preached youth services, and youth revivals. He was the guest speaker in several youth camps, as well as many church revivals. In 1985, he began a successful, full time evangelistic and missionary endeavor which he continued for the next 7 1/2 years. Dr. Vorce has traveled throughout the US, Mexico, Canada, the Cree Nation and Jamaica preaching revivals, crusades, conventions, and camp meetings. He is a published author and the host of Working the Word (a weekly television program).

Since 1993, Dr. Vorce has served as Lead Pastor of 4 congregations. Since May 2010 Dr. Vorce and his family are currently serving as Lead Pastors of the Lakewood Family Church in Bayonet Point, FL where their main focus involves, but is not limited to, organization, administration, leadership training, teaching and preaching, counseling, mentoring, community interaction and being an example to those they are privileged to lead.

Dr. Vorce has also been actively involved in Civic Leadership in the local communities where he has served on various boards including Christian School Boards, Chambers of Commerce, Coalitions for Racial Reconciliation, Chaplaincy and various other positions of civic leadership. (both elected and appointed).

On January 27th, 1990, Jonathan married his beautiful wife Donna, and God blessed them with three children, twin daughters Susie & Nikki, a son Jeremiah, a daughter-in-love Marissa, a son-in-love, Luke and two grandchildren, Sophia Ann and Gracie Kaye! Dr. Vorce says that few ministries can achieve this level of success without having to fight battles. He encourages us with these statements, “Sometimes you just have to love God more than you hurt!” and “The Word Will Work if you Work the Word… SO WORK IT!”